Based on our book, Out of Order/Shutting Down the Streets: Social Control in the Era of Global Governance people expect me to have lots to say about police violence and the current wave of mobilizations in the US. I don’t feel like the most informed person actually, given that I’m living between Sydney and Berlin at the moment, but the following interview was mostly about social movements and I think it’s helpful.
San Francisco: The protests here in the Bay Area seem to have been longer-lasting and larger than those in New York or Ferguson. That seems like a puzzle. What do you think explains it? Is it just the left-leaning culture of Berkeley and Oakland? It is a cycle of action and response between demonstrators and police? Generally speaking, what’s the trajectory we’re looking at with a protest movement like this one? Is a multi-week period like this very common?

Amory: One of the most important factors in social movement organizing is what is often called “cultures of resistance”. This includes personal experiences, shared values, memory/learning, institutional capacity, mobilizing technologies, and political ideology/interpretation (outrage). Historical evidence insists that oppression on its own does not produce social movement reaction. In places with little culture of resistance, there will be little social movement reaction to social problems, or occasional outbursts may not be sustained. San Francisco has had, regularly and recently over the last decades, a series of effective and sustained street manifestations, so there are people, organizations, networks, systems, etc. to make the next ones bigger and more robust.

San Francisco: In terms of tactics, we’ve seen protestors do everything from march, to block mass transit and the freeways. They’ve done actions during holiday shopping as well as the more usual campus locations. What does the research indicate tends to be the more effective tactics for a movement like this one, and what ends up as counter-productive?

Amory: There are two answers to this question. If the goal is to win a reform of a specific policy, the most effective actions are those which raise the costs of the current/opposed way of operating to the point that changing the policy becomes cheaper/in-the-best-interests-of the elites/decisionmakers. The way to raise the costs is to disrupt normal operations so that it literally becomes more expensive for the powers-that-be to get things done.

If the goal is to create a more general social transformation, such as shifting to a more sustainable, feminist, or anti-racist society, which involves not only policy changes but cultural changes and institutional innovation as well, then basically everything that spreads and innovates the desired idea helps the new idea to become normal, to be integrated into mainstream social values and practices. As diverse articulations saturate the cultural sphere, the new idea eclipses the old ideas. Policies can be easier developed and implemented, innovations can be funded, personal expression becomes more safe, and everything in-between.

San Francisco: It’s pretty common both to see a black bloc emerge and also for liberal elected discourse to move to isolate them? You’ll often read press releases saying things like “we support the protests but not the violence.” Is that the right analytic framework to bring to the relationship of more aggressive direct action and the larger, more peaceful, protests? In a sense, what I’m asking is, do the more violent factions exist as a part within the larger movement or a separate entity?

Amory: The two above answers should help you understand this one. Disruptive action is the only thing that will produce sufficient inconvenience to get an immediate reaction. If you have a LOT of people, you can disrupt with a mass of immoving bodies. When there are fewer people, property crime (such as building barricades to block streets or causing expenses to businesses) can be helpful in creating a sense of threat to the well-being of the current regime. For longer-term general social change the issue is different. There are many kinds of people who need to see the new ideas as desirable and we need every kind of image and expression to address every subculture and personal experience. In a diverse society, a new idea like sustainability is going to need a lot of different expressions, almost like translating into different languages, so people see this idea as relevant to the things that are frustrating them, so that they see themselves represented, etc.

San Francisco: In terms of the police response, there’s been reports of tear gas and strong arm tactics? Can you speak to both the effectiveness of those in the moment and also what they provoke over the longer term?

Amory: Generally these tactics make the powers-that-be look bad, and the protesters look good. And the experience of police violence is reliably radicalizing. But radicalization (for example recognizing that the state is not actually respectful of civil rights) does not always translate to increased mobilization. An example is the very sudden and aggressive tear-gassing of the 15 February 2003 anti-war march in Colorado Springs. (It was one of the only episodes of police violence on this historic day of 16 million mobilizing on every continent.) It was such a sudden and aggressive attack on diverse people who were actually leaving from the end of a peaceful march, many of them loading kids into cars and so forth, that it put an end to anti-war mobilizations in Colorado for a while. Everyone there was radicalized, but simultaneously demobilized. So the police/state can do things that make it look bad, and do not help its case in the long-run, but that are effective of clearing the streets in the short-term, and this is really the decision-risk for any protest policing. The costs to them are usually long term.

San Francisco: Any books you might recommend people check out to get a larger grasp on these kinds of issues?

Amory: Our book, Out of Order/Shutting down the Streets is really the only book that makes a comprehensive analysis of the social control of dissent post-1980s. Regarding the social movements issues I discussed, the three most important texts are: Piven & Cloward, Poor People’s Movements (about reform), Melucci, Nomads of the Present (about social transformation), and Foran, Taking Power (about the conditions for revolution).

San Francisco: Anything else I should have asked you about?

Amory: I think something that is important with regard to your first question is the degree to which more and more are people are making connections between the issues around which there have been local street manifestations over the last decade — anti-globalization, anti-war, climate, biotech, GFC, police violence … Is there a connected analysis which then relates to the modes of action? My first book, Naming the Enemy, predicted the emergence of the anti-globalization movement. My point, and the point of the movement, was that diverse communities fighting diverse problems started naming the same enemy – multinational corporations, and this was a lurch forward for political analysis and for political solidarity. Is the police violence issue conceptually linked with the 99% issue? Is it linked with anti-war issues? These kind of connections are very important for the consolidation and popularization of socially transformative ideas in the long-term. 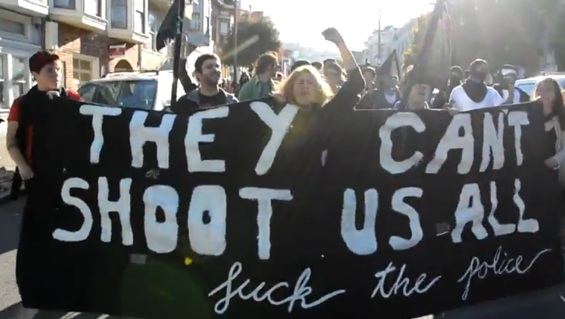