In Berlin, the Markthalle IX was developed in the building of one of the city’s former wholesale markets. Unlike most European food halls, the Markthalle has a mission to incubate high-quality bioregional food businesses. The organize the space and events to support showcase local foodlings from their very first public taco.

Thursday night is “Street Food Thursday” one of the hottest items on Berlin’s schedule (next to the Markthalle’s monthly Sunday “Breakfast Market”). By 19:00 the aisles are impassably packed with cheerful folks jostling to see what’s new.

The mozzarella and truffle stands offer “shots” (one bite,  served in a shot glass) for 2€ as well as small plates for €4-€8.

At 1700 it was possible to walk around looking at the stalls.  But 1730 all the picnic tables were occupied,  and by 1900 the aisles were impassible with long lines for almost all stalls.  No one seemed to mind,  though,  because the whole place was a cocktail party.  People are drinking beer and wine in proper glasses. It’s a social event,  for couples and groups of all ages,  snacking and drinking,  most without a table.

About 2/3 of the Halle’s floorspace is devoted to temporary stalls. Newcomers can rent as little as half a picnic table to try selling donuts or kombucha – so long as it’s handmade. If they’re successful, they may bring a sign the next time and if they’re supersuccessful they may eventually work their way to customizing one of the permanent slots taking up the other 1/3 of the floorspace. Many of the foodlings have graduated to proper “brick and mortar” full-time operations outside, but still come back to join vendors from the Markthalle and the region at a series of annual educational  events.

For special events 1/2 of the Martkthalle’s flexible space is devoted to education, with stations about ethics and ecology,  traditions and gastronomy, culinary expositions, and taste education. Themes include “Wurst & Bier”, “Cheese Berlin”, Raw Wine, Chocolate, Coffee, Dia de los Muertos,  and more. Each of these annual festivals draw producers and educators from all of Europe. During the “Stadt, Food, Land” bioregional festival, the Markthalle expands to the four surrounding streets, devoting a full block each to education about meat, cheese, vegetables, and dessert.

Weekly in the Markthalle, Wednesday to Sunday, bioregional meat smokers, tofu makers, wine vendors, farmers, bakers,  pasta-maker, and a leader of Europe’s ethical butchery scene offer groceries and lunch, with beer made in the  shared basement kitchen. And the Markthalle does home delivery and restaurant procurement. Spotting their van outside a restaurant imparts significant cachet.

The large covered hall hosts an artisan food market several days a week every Thursday there’s a “night street food market”  which is a food truck scene without the trucks,  each stand vetted for interest and quality. Unlike many other informal gourmet scenes,  this one offered more product range with tThere was American barbecue,  arepas, waffles.  The emphasis was on fresh preparation,  so was assembled after the order placed.  The mozzarella fit told me the provenance of the converged and the salt as he dressed my caprese salad.  Fish was smoked on premises,  and a whole pig had been barbecued  (and sold out in about an hour.  Beautiful focaccia (including a sweet version) was baking. 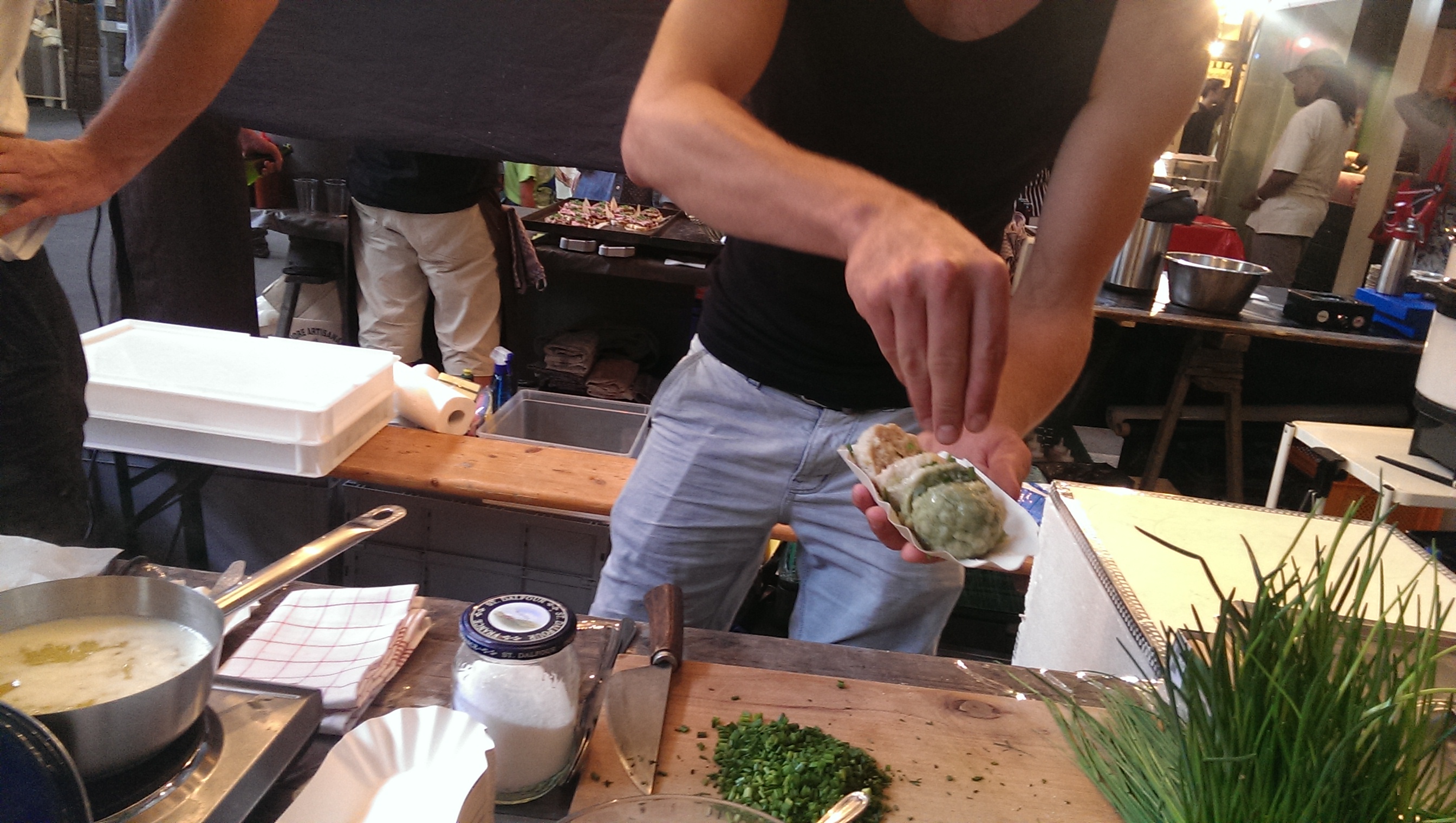