I have told this story in this way ever since that moment, always with his name. It was such a powerful and for me life-changing moment. I remember it so clearly.

(You guys may recall the inside joke in this story which is that after the trip the main issue in the rather short-sighted Fort Collins press who came to my house to interview us was not that we had made history but that we had used university vans for an inappropriate purpose.)

I live now in Berlin, I’m retired, and I’m an artist. This past June I was hired to do a roadshow to mobilize people against the G20 meetings in Hamburg. The organizers asked me to talk about why people should participate in mass mobilizations. I spent some weeks reflecting on what Seattle meant to me, how to make sense of that experience so many years later. It’s a hard question: Did we make a difference? Was the risk of those actions worthwhile? In Hamburg I met a guy who was a street medic in Seattle. We talked about how Seattle changed our lives.

Familiarity with the moment of decision to step into the unknown – that’s the gift that John gave me. It’s a gift that has been the aperture so many times in my life, to so many dreams, to the experience of creativity, to the greatest moments of my life that I can call “art”. That we can act without knowing how we are going to do it. That we can act knowing that we will not be alone there. And the lesson of Seattle, well held against the fear, was that in the unknown there would be treasures we can’t imagine.

This bannerhang is one of the treasures who appeared in the mystery at 04:00 on N30, as the 22 people who shared this experience as a direct result of John’s Demand, traveled into the unknown of our first Action. And another of the moments of my life for which I am most grateful.

The experience of suddenly witnessing this bannerhang as we rounded a bend on the highway told us that we were so much bigger than we know. That we were so much less alone than we thought. That we could be confident in our ideas. That brave beautiful enormous things were absolutely possible.

On the occasion of your departure,
may everyone who knew
or was somehow touched by you
find in ourselves
an increase
in the daring courage,
persistent work,
and scale of faithful vision
which you illuminated through your action. 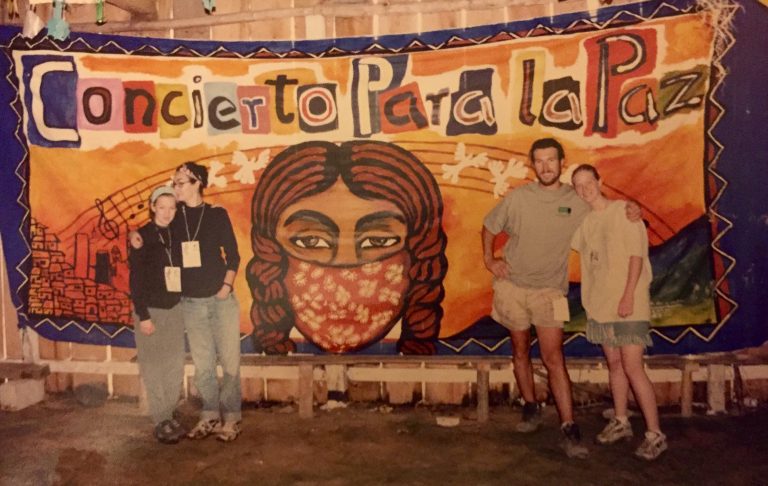