How to hunt cheese

The hunt for cheese is on. My most frequent site are the weekly farmers markets. The “Mercato Campagna Amica” (yellow tents) and “Earth Market” networks include only local producers selling their own products from the locality. The weekly “markets” include some of the same producers, as well as importers offering products from other parts of Italy (and stalls selling cheap clothing, bleach, and giftwrap). Generally there isn’t food offered there from any other countries.

I also check the “gastronomia”, these are small shops selling some assortment of the following savory goods: fresh meat, salumi (charcuterie), cheese, canned goods, pasta, wine. In these shops you wait your turn and do your whole order by speaking with the shop keeper who assembles things from the case and the shelves for you, while talking about recipes and so forth. These shops tend to carry a majority of items from the region, augmented with a few of the most popular items from other regions, and sometimes one or two French or Swiss cheeses. Many of the gastronomia I’ve visited do not carry high quality goods, although their prices are higher than the outdoor markets. They are not what we would call “gourmet shops”, offering luxury goods at high prices, they are ordinary shops where people go for daily needs. Some of them cater to a more discerning clientele and have higher quality products.

New in Italy is the Slow Food supermarket, Eataly, which has strict quality standards and aims to bring the best of all of Italy to every region (and to New York!)

So the interesting first thing I’ve learned is that just because I’m finally in Italy doesn’t mean I’m going to be able to get my favorite cheeses from Sicily and Campania (Southern Italy) any easier here in Turin (the Piemonte region is in the NorthWest of Italy) than in Berlin or Paris, because most of what’s on offer is going to be local. In fact even a cheese I love from Piemonte’s neighbor Emilia-Romagna isn’t available here. But when I went to Eataly Turin for a particular Sicilian cheese, it had sold out over the holidays. People do love the products from other regions.

The next thing I’ve learned is one of those things you learn that make you feel you were very stupid before. Pecorino is not a kind of cheese. It only means “made from sheep’s milk”. The misunderstanding is understandable because in the US almost all Pecorino imported is Pecorino Romano, a straightforward hard, nutty, salty cheese without the sourness (or pricetag) of Parmigiano Reggiano. Once –but only at the elite Formaggio’s Kitchen– I had “young Pecorino”, a mild, waxy, better-tasting version of American “jack”. Before moving here I’d had many other sheep’s cheeses from various countries, and was under the impression that I almost always like sheep’s cheese. But the range of things called Pecorino in this country destroys anything you might try to say about them. It’s no more specific than saying  “cheese made from cow’s milk” which most people know runs all the way from brie to cheddar to blue cheese, or “cheese made from goat’s milk”, which runs from tart fresh chévre to quite rotten little mushrooms all the way to gouda.

I met Pecorino Canestrato at Vom Einfachen das Gute, one of the few cheese shops in Berlin offering Italian cheese beyond Parmigiano  Reggiano (along with regional wines, cheese, and charcuterie). It tasted like eggy fresh pasta, which delighted me because that’s what I was usually shaving it over. It’s the “sold out” Sicilian.

I knew better than to ask at local gastronomia for Ubriacone, having realized that the mystery cheese of 2018 is from Veneto, several hundred kilometers to the east. But when I asked at Eataly I discovered that it too is not exactly a type of cheese. Ubriacone just means drunken. Any kind of cheese can be coated with wine, or even packed in the spent peel of crushed wine grapes as part of the process. When I asked for Ubriacone and showed a photo that included the sign, the monger at Eataly said, “well we have cheese in Barolo, but not in Cabernet”. I tasted several, all much younger than my Ubriacone.

The tasting slices were quite large for me, About 5 bites which is a lot for a cheese I don’t like, and enough to go a bit deeper into what is quite tasty there behind the part that I don’t like (without having to wake up with it in my fridge).

The third one we tasted reminded me that a cheese who joined the “like” list some years ago was in fact one of these younger Ubriacones, called “Testun al Barolo”, from Cuneo, a southern territory within Piemonte. Here it’s 1/3 the price I paid for it in Sydney. Testun al Barolo is a crumbly, pasty cheese with nothing in common to the nutty aged-gouda character of the Veneto. Because the important part is not that they are drunken, but that one is a testun and the other is something like a grana.


At left the “mystery” ubriacone, with a grana


FOUND! a year later, this time with a sign

Grana is the style and method of cheese that when it is made in the right place and to the standards of the D.O.P. assessors will be called Parmigiano Reggiano. 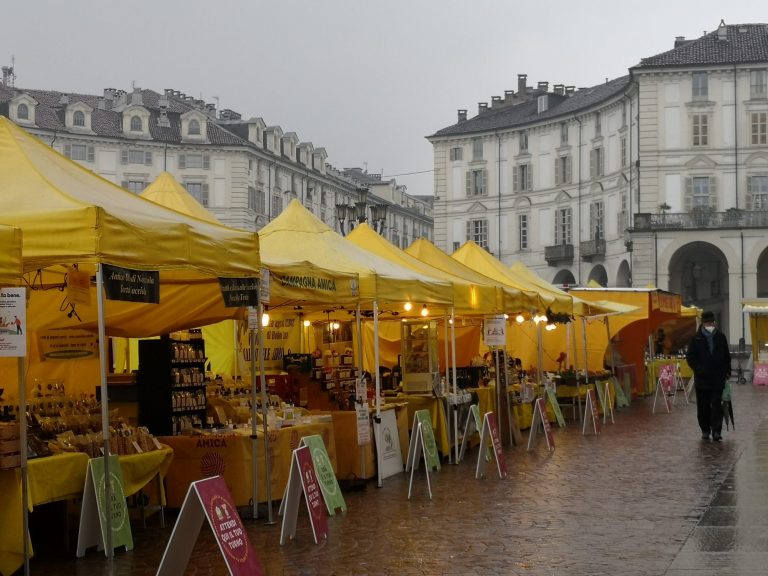