Food Sovereignty as a Social Movement (at Sydney Environment Institute)

It’s a massive honor to be here with Michael Croft.

[1] I wasn’t this close to Lee Kyung Hae in Cancún. I was a few meters back.  But my team got footage of him walking down to the fence that day.. And I was in the ministerial meeting when the African delegates walked out and announced the failure of the meetings, based on their unwillingness to participate further. That night I had my first Spanish lesson, passing some Mexican activistas in the street.

[2] After spending a lot of time with these guys, trying to politicise people by exposing them to the violence of the police who are defending undemocratic meetings at which global policy is written.  I started to think that maybe what we need to do is build political consciousness before these confrontations. [3]  And I thought what about exposing people to the taste of ripe heirloom tomatoes?

[4] So I invited everyone I know over to dinner and talked about food with them. And I did that every month for a year and started to feel that it was the best activism I’d ever done. And then I went back and re-read all the scholarship on social movements.

[5] [6]
Eyerman and Jamison talk about what social movements do is create new ideas, even a new cosmology. The example is the environmental movement. 50 years ago the idea that humans live in an ecology was a marginal view. Today it’s hegemonic.

[7] So what is the cosmology of food sovereignty? Food is a community, not a commodity… But how do we turn this idea into culture?
[8] Alberto Melucci explains how it is that we create culture… through creating new spaces, identities, meanings, identities, commitments….
[9]
[10] Here’s an analysis I did, looking at the local food movement in the terms laid out by Melucci and Eyerman & Jamison. How did it happen that in the ruins of Wall Street, Americans built a new economy that is delivering $4.8B annually to small farms? And in [11] all the green bits are those same innovations here in Australia. That means that

So I’ve learned that I’m always drawn to the bleeding edge of things.

[16] the symbol scheme problem. I’ve got fair trade in one hand and organic in the other.
Have we won or lost?
We have won the battle for the cosmology, but now we need to deepen the analysis. I’m going to go back to James Bond. Everybody knows that the first little victory in an action movie is not the end of the story. You catch the shady guy and knock him out and go through his pockets to get another clue, to find out who he’s working for, to deepen your understanding of the story. This goes on and on, everyone knows how it works, we’re well trained. eventually you get to the superduper bad guy and then it’s the biggest fight of all, but by then we understand a lot and we have a lot more skill.

And don’t underestimate people. Think about the amount of information and analysis that sports fans do. They can handle it.

So our job is to find ways to take the analysis deeper. [17] A great example of taking it deeper is the idea of Slow Food which actually foregrounds the “right to pleasure” – that really gets at the difference between food security and food sovereignty, doesn’t it?

So in everything we do, we need to be taking people deeper. [18] The way i’m doing that is i’m trying to learn new principles of economics, and i’m trying to learn them from artisans.
I’ve been asking artisans two questions: “Why do you do what you do?” and “Why do people buy from you?”

During the discussion afterward, the major topic of debate was the popular accusation that the local food movement is white, expensive, and romanticized. I argued that it’s never been white, but, as usual, people of color who are primary participants in (and in the US often founders of) urban farming, are not visible in representations of local food. I also argued that the expense is a myth. While there are expensive items at farmers markets, fresh and healthy food is also available there at less than the prices of processed food. The problem is that people may not know how to cook this food. Fortunately chefs are taking on “the cooking problem” with especial attention to low-income families. (See The Square Food Foundation.) With regard to romanticization of the movement, Michael Croft emphasized the reality of this movement for the millions of peasant farmers who have built La Vía Campesina and I mentioned that in the US the movement is inspired by the Latin American social movements’ request that we go home and work to sustain our own consumption to get the US [military] “boot off the neck” of the Latin American economies. For those interested in expanding the food sovereignty movement to low income communities and communities of color in Australia, I recommended the early white papers and successful congressional grants (e.g. the Community Food Security Empowerment Act) of the US Community Food Security Coalition (now defunct). Here’s a 1995 paper by the founder, Robert Gottlieb, describing their policy approaches.

Regarding this debate, it seems mired in identity politics which is more about repeating dismissive rumours than it is about engaging with potentially transformative practices. Let us resist a form of politics satisfied with righteous trumping accusations and get to work together to expand and transform our successes and vision. 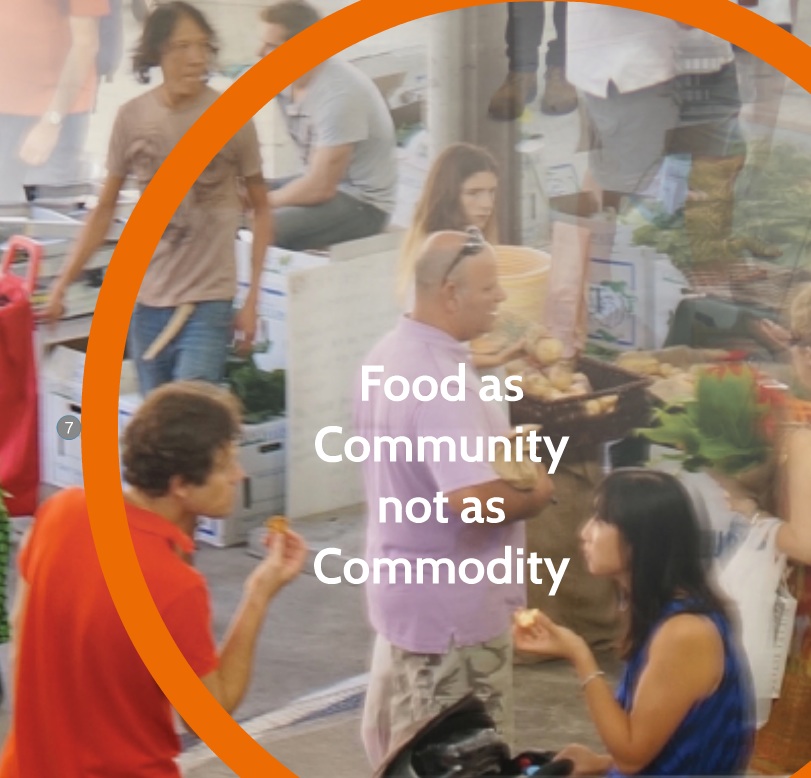