Disciplined Minds: A Critical Look at Salaried Professionals and the Soul-Battering System that Shapes their Lives (2000: Rowman & Littlefield, Lanham) by Jeff Schmidt, a physicist and former editor for Physics Today.

In the first months of graduate school at UCSB, Professor Tom Scheff told me that i needed to write down who I was “because you’re going to lose her and you may want her back some day.” I heeded that advice. I also held on to it as a warning about what would happen in the graduate program. As a professor, I passed on this advice to many young friends, still not fully understanding it.

Until I read this book I was completely mystified by what was happening in graduate school and why. Schmidt explains that the most important function of graduate training is to enforce ideological discipline NOT over the personal political viewpoints of professionals (which have little impact on the world), but over their willingness to conform to professional hierarchies (which has much more serious consequences).

He begins the book by noting that “professionals are fundamentally conservative” in the workplace even though most are liberals in their social views. [4] While many of us complained about being nonconsensually “socialized” and “professionalized”, that did not explain the bewildering contradictions between our professors’ socially radical published work and their day-to-day elitism, anti-democracy, and disinterest in social struggle.Schmidt’s book examines how professionals are produced and disciplined. “Depression is most likely to hit the most devoted professionals…Today’s disillusioned professionals entered their fields expecting to do work that would ‘make a difference’ in the world and add meaning to their lives…In fact, professional education and employment push people to accept a role in which they do not make a significant difference, a politically subordinate role…The intellectual boot camp known as graduate or professional school…systematically grinds down the student’s spirit and ultimately produces obedient thinkers.” [2]

The professions maintain the status quo through the work they define and permit. In the social sciences it is publishing highly specialized articles in elite journals. In medicine it is “patching people up…never to take a stand against the social inequities that generate so much stress and disease.” [109] Aspiring professionals who are unable or unwilling to conform are weeded out, marginalized, or abused (always using the rhetoric of meritocracy). As junior professionals realize they will not be able to fulfill their vision of social transformation, they embrace ego and status (and, in fields that offer it, high pay) as the “compensation for intellectual interests and social goals abandoned.” [119]

“Deprived of political control over their own work, they become alienated from their subjects and measure their lives by success in the marketplace.” [146]

Remember that it’s not the issue of political control over the content of what you write, it’s political control over things like … who you write for, how you write it, whether you do “applied” work, how you define your role as a “public intellectual”, class consciousness among university workers, kissing ass and making “contacts” in order to get your science “seen” in the meritocracy, and how you deal with oppression in your institution! Turns out that Scheff has written two interesting very short pieces about the way that conformity is imposed on the content of our work as well… #4 & #23 at http://www.soc.ucsb.edu/faculty/scheff/. Apparently, innovation is not the key to success.

Schmidt argues that those who were in it for the status or money all along are most likely to succeed. Those with other visions are successful to the degree that they are willing to “become the type of person the system demands…When students fail to complete professional training programs, they almost always do so because they have problems adjusting their attitude, not because they are unable to learn the technical tricks of the trade.” [149, 148] Think about everyone you know who dropped out… He argues that “the qualifying attitude, the way it is favored and the way it is measured are very much the same across the professions. ” [21] The attitude which must be demonstrated is subordination. 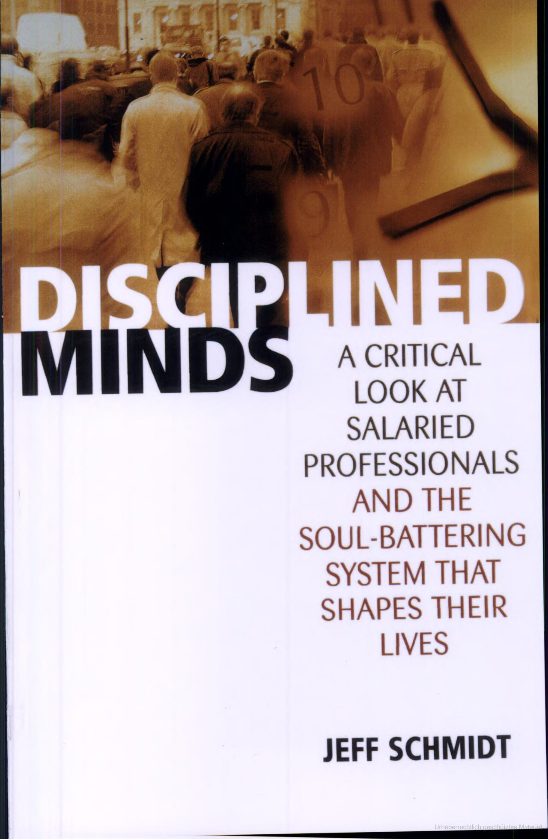